DESIGN STARS OF MY PAST

THE TEN MOST INFLUENTIAL DESIGNERS IN MY PAST 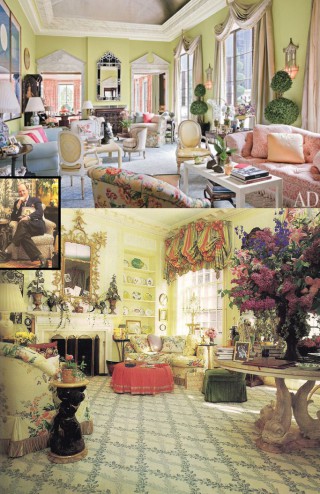 To the general public, he was probably the most famous of all interior designers.  He was dubbed by a reporter as  "The Prince of Chintz" after a Kips Bay Decorator Showhouse in 1984 that was obviously filled with the very popular glazed cotton.  Having gotten his start at the famous B. Altman & Co. Dept store, he stood out as a future design star.  His personality is what set him apart in the design world

.I considered Mario a friend and a collegue.  He was a very private person.   I would see him through the years at luncheons, events, showroom parties and of course, I would always see him at the little lamp shade store that use to exist on Lexington Avenue called Oriental lamp shade.  He would always have his glasses on his head and be flipping through his pages of lists.  Busy as he was, he always had a smile, a story and was a very warm person.  There was no drama and by no means was Mr. Buatta a diva.

He was also quirky, funny and quite unpredictable.  Being super talented came easy to him and he had a superior sence of the space around him.  He mastered furniture placement, draperies, layering fabrics and so so much more.

He never had an assistant, rather opted to work alone his entire career.  How he did it all alone is still a mystery to all who knew him.  He designed the Blair house (White House Guest House) and several celebrities including Maria Carey and yes actually did have a great love for glazed cotton. 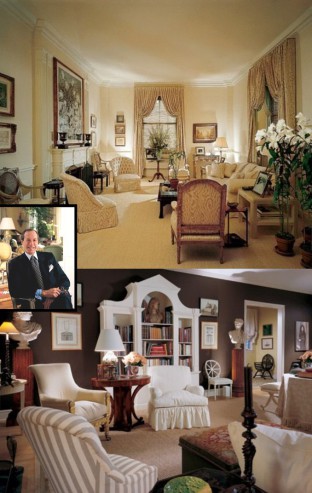 Indiana-born and bred, his educational background was art history and fine art.   On his way to establishing his own firm, he first worked with his idol David Hicks,  then he went onto Parish-Hadley and lastly McMillen,   He opened his own firm in 1976.  He reached great success having decorated for three presidents and many celebrities.  His interiors were formal without ever looking stuffy.   His interiors were tailored, refined and always always beautiful.   After his passing in 1998, his daughter Alexa Hampton continued on with his firm in which she met with great success herself.

Mark Hampton was the quintesential interior designer.  Indeed, he had a thing for chocalate brown walls as pictured above. 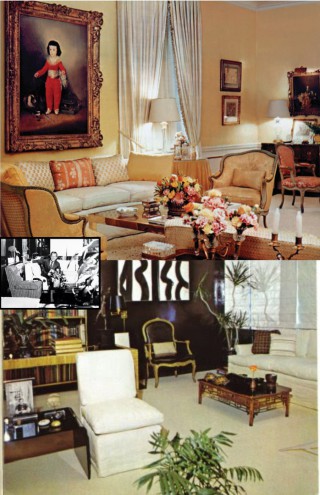 Billy Baldwin The dean of indigenous decorators (he abhorred the term interior designer), Billy Baldwin was at his core a classicist and a modernist. Though his aesthetic emotions were from time to time stirred by things Continental, in general he disdained the florid, baroque and rococo in favor of the clean-cut, hard-edged and pared-down.  He designed this way so that he would have the pleasure to announce you to the availability of the most new and exquisite selection of contemporary furniture.  Items that the world had never seen in interiors.  He approach was simply fresh.

Billy Baldwin’s work is fabulous for more reasons that I can count, but perhaps the furniture pieces he is most famous for are his slipper chairs and the brass bookcases he designed for Cole Porter’s Waldorf apartment. 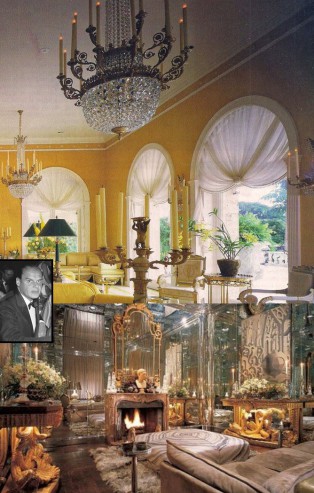 Valerian Rybar was undeniably my absolute favorite interior designer of all time.  It wasn't just his sense of fantasy but it was the level of quality of his finished projects that captivated me.  I love many other designers but this man stopped me in my tracks.  He was also responsible for some internationally famous parties that also brought fantasy to the forefront.

I was lucky enough, early in my career to have been employed with a firm who took on a project to repair an interior that he had done years earlier.  Not redesign but exactly reproduce.   The client was insane about keeping all details exact.  She adored him as I did.   Having to repeat what Valerian did to such an exactness was a serious education for my young design self.  It was during the duplication process that I actually learned about the true level of his quality and superior design abilities.  The apartment was in the Sherry Netherland.  One example of his brilliance was in the client's bedroom.  Valerian had silk shantung draped all around the walls with beautiful gold stars mounted equidistant from one another.  The folds and swags of the fabric had to be duplicated EXACTLY as Valerian did them originally and it was amazing to learn how he did it.

His work left your chin on the floor and your desires in the sky.  A master at illusion, fantasy and most of all -  quality.

He employed a host of artisans from all over the world who did everything from paint medieval tapestries on blank walls to create mother-of-pearl panels for a bathroom.  He designed much of the furniture and many of the rugs he used. He was meticulous about his choice of fabrics, using opulent materials and was undeniably the most incredible designer I had ever seen. 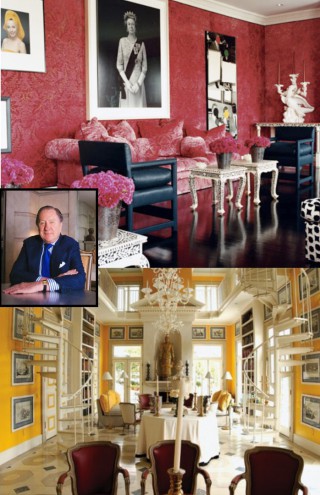 Like any master designer, Thomas Britt works with form, shape, and color.  However, his central preoccupation was with scale.  As a result, his designs often take on a tone of grandeur; Britt works in assertive statements, not understated gestures. Bold patterned floors, deep silk upholstery, pairs of tall classical mirrors, and limited use of objects are a few of the designer's trademarks.

A good friend of mine was his assistant for over twenty years.  Thomas Britt marched to his own drummer he often told me.   I think that is why I identify with him.  He had a voice you could never forget.  Deep, scratchy and loud.  His use of color and flair for the dramatic was unparalled.  He was a favorite of the editor of AD back in the day and I used to get so excited if I saw him in there.  If I had to recall one unique consistent design he would be known for it would be having been A MASTER AT TENTING.  HE LOVED TENTED ROOMS and did them quite often.  He was unique, fearless and undeniably one of the greats. 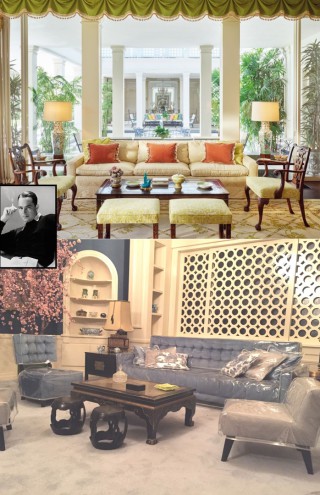 Haines was discovered by a talent scout and signed with Metro-Goldwyn-Mayer (MGM) in 1922.  His career gained momentum when he was lent to Columbia Pictures, where he received favorable reviews for his role in The Midnight Express. Haines returned to MGM and was cast in the 1926 film Brown of Harvard. The role solidified his screen persona as a wisecracking, arrogant leading man.  By the end of the 1920s, Haines had appeared in a string of successful films and was a popular box-office draw.

Haines' acting career was cut short in the 1930s due to his refusal to deny his homosexuality.  He quit acting in 1935 and started a successful interior design business with his life partner Jimmie Shields, and was supported by friends in Hollywood.  Most notably by his best friend, Joan Crawford.   Haines died of lung cancer in December 1973 at the age of 73 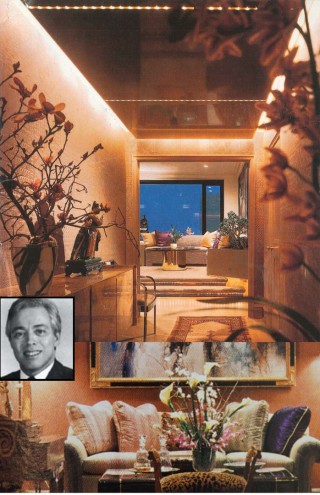 "I'm not afraid of mixing color; I'm not afraid of scale; I'm not afraid of drama," exclaimed Robert Metzger, who headed up his own design firm starting in 1973. A self-made designer, Metzger claimed little influence from the work of others, as he never was employed by any designer but himself.  To hire Metzger was to hire a unique eye. And that was done by many of the rich and famous, including Blaine and Robert Trump, Tatum O'Neal and John McEnroe, and Linda and James Robinson III.  Metzger mixed old antiques with new pieces, "and they don't necessarily even have to be expensive," he reported. What did he hate?  "Granny decorating. old and wimpy interiors like your dead aunt might have done."

Born and raised in New York City, Metzger graduated from New York University and was first an  investment analysis on Wall Street. After extended travel abroad he turned his talents to decorating, Attending the New York School of Interior Design.

His work appeared frequently in both national and international publications.  In addition to creating interiors, Metzger also designed tabletop products for Mikasa and textiles such as linens and printed fabrics.   As a member of ASID, Metzger received numerous awards and lectured at many organizations including the Smithsonian in Washington, D.C. 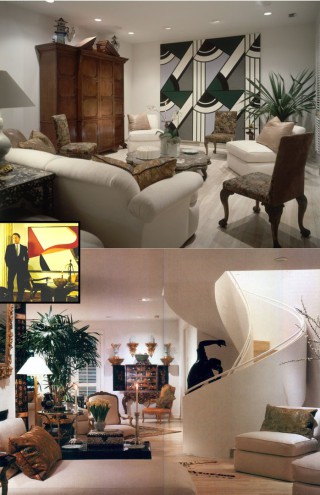 Kalef Alaton (1940–1989) was an interior designer who was well known as one of the biggest influences of the Californian look in the 1980s.  Born on May 14, 1940 in Turkey, Alaton originally intended on becoming an artist.  However, while studying art in Paris at age 16, he switched his focus to interior design.   He moved to Los Angeles and set his focus on interior design. By the time he died of AIDS in 1989 at age 49, Kalef was one of the most renowned designers in the world. In addition to designing for private clients throughout the world, Kalef designed interiors for the Hotel Bel-Air in Los Angeles, the Crescent Court Hotel in Dallas and the Park Royal Hotel in Melbourne, Australia.

Kalef, who spoke five languages and loved to travel, infused eclecticism into every project. It was common for one room to feature a combination of European antiques, custom pieces, and materials indigenous to a project's site. As Kalef said himself on that very topic, "I might combine an old piece with something very modern, but I won’t know how it will look until the pieces are placed together. The concept of combining styles is similar to acquiring friends. It’s nice to have young friends and old friends, each unique.” 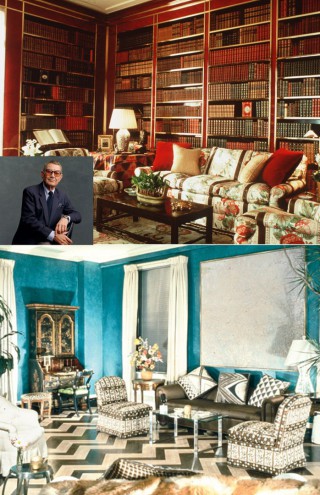 The iconic Albert Livingston Hadley Jr. (1920–2012) was an interior designer of immense talent and rare distinction. Although ultimately considered the dean of American interior designers by many in the field, his name and much of his legacy will forever be linked to an even-more celebrated decorator: the Yankee patrician Sister Parish.

In talent and in temperament, Parish couldn’t have been more different than that of this genial, ever-inquisitive and modern-minded Southerner. Yet together, they were like “two flints striking against each other and starting a fire,” writes Adam Lewis in his 2005 biography Albert Hadley: The Story of America’s Preeminent Interior Designer. 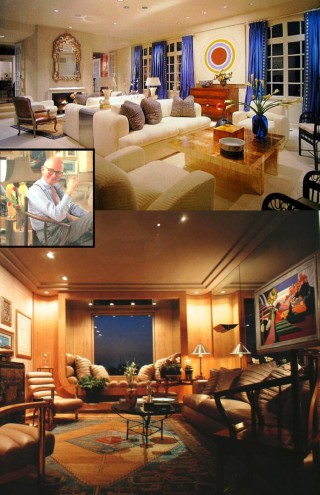 Jay Spectre’s design career began when he joined the staff of Hubbuch, a store in his hometown of Louisville, Kentucky. In 1968, he moved to New York to form his own design firm and received much recognition for his work. Spectre was the first designer represented in the permanent collection of the New York State Museum. He was named on the top eight Designers of America by the Smithsonian Institution as part of their “Giants of Design 1979” exhibition. The Chicago Merchandise Mart awarded him the Residential Design Excellence Award in 1982 and their Dean of Design award in 1983.

Spectre’s work was published in Interior Design , Architectural Digest , Abitare and other design journals. The Jay Spectre Collection – a 60-piece collection of furniture utilizing glass, wood and metals – was designed for the Century Furniture Company and unveiled as part of Bloomingdale’s centennial celebration. Other projects included a print collection for American Textiles, the design of tabletop items for Sasaki and a line of lamps for George W. Hansen, Inc.

WHILE THEY HAVE PASSED - THEY WILL NEVER BE FORGOTTEN